Takeaways from ENEL conference on the Green Economy

Home » News » Takeaways from ENEL conference on the Green Economy 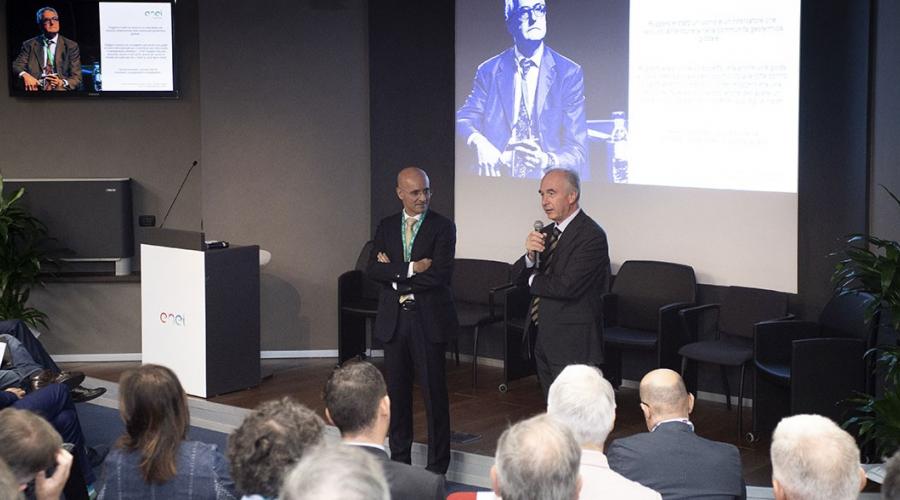 On 1 October 2018, John Favaro of Global5G.org participated in the conference "Prospects and Benefits of the Green Economy" at the ENEL Research Center in Pisa during the International Robotics Festival taking place across the Italian city.

The dense program, moderated by Professor Franco Donatini of the University of Pisa, began with an introduction and greetings from Giovanni Tula, Head of Innovation and Sustainability Enel Green Power, and Massimo Montemaggi, Head of Geothermal for Enel Green Power.

Their introductory greeting was followed by a presentation by Domenico Laforenza, President of the Italian National Research Centers in Pisa, Italy. Dr Laforenza provided an overview of important ICT related technologies and projects relevant to the production and management of green energy, singling out the Internet of Things and Fifth-Generation (5G) Wireless technologies as particularly important.

Gianluca Gigliucci, Head of Innovation Storage at Enel Green Power, pointed out the enormous potential for disruption in the energy industry because renewable energy sources are now becoming cheaper than traditional sources, bringing us toward a 100% renewable world.

He was followed by Professor Romano Giglioli of the University of Pisa, who explained the role of networks and energy accumulation in the overall scenario. In the effort to achieve “decarbonization”, he noted that two routes are being followed: more use of renewable energy, and less use of energy in general. He highlighted the fact that computers, ironically, are becoming the largest consumers of energy worldwide, pointing to the rise of data centres for cloud storage, and digital currencies such as Bitcoin.

Italy and the circular economy: opportunities and barriers

Ermete Realacci, Italian parliamentarian and also president of the Symbola Foundation, discussed key concepts of the green, or “circular economy”, noting that Italy had all of the potential to become a leader in this area, and was already leading in many sectors. For example, 60% of all make-up is produced in Italy, and considerable innovation has already occurred in ensuring that its packaging is energy and waste-conscious.

Professor Federico Testa, President of ENEA, talked about the potential of the Green Economy, while pointing out obstacles that must still be overcome, such as effective incentives for private citizens to welcome green energy initiatives into their homes.

He was followed by Professor Marco Frey of the Sant’Anna University in Pisa, who spoke on problems of innovation and sustainability. In an appeal to policymakers, he cited Michael Porter, dean of strategic corporate management, who pointed out more than twenty years ago that managers should change their perspective to see environmental pollution not only as a social evil but also as an economically wasteful activity.

Ernesto Ciorra, Chief Innovation Officer for Enel, continued in this vein, pointing out that it was perfectly possible to respect the environment and also corporate shareholders. It does not have to be a painful trade-off, he underlined.

Marco Paci, head of geothermal laboratories at Enel Green Power, and Niccolo’ Bassi of F&M, a spinoff of the University of Florence, then presented an initiative to harvest and promote spirulina algae (“nature’s superfood”), which appears naturally at geothermal plants, as an example of the potential of geothermal energy to diversify its contributions to the green economy.

Panel Debate on innovation and sustainability: perspectives from Global5G.org

The conference concluded with an hour-long round table of experts moderated by Professor Franco Donatini on the topic of innovation and sustainability in the sector of geothermal energy.

Discussing the possibilities for technology transfer of geothermal energy production to new geographical locations, including those in emerging economies, John Favaro of the Global5G.org project highlighted the fact that governmental initiatives in technology transfer dwarf any commercial or private initiatives in emerging economies because of the scale needed to achieve success. As an example, he cited the Fifth Generation (5G) Wireless technology mentioned earlier by Domenico Laforenza. He explained that he had observed a lower level of participation of the geothermal energy sector in the large government programmes such as the European H2020 programme, with respect to other forms of renewable energy such as wind and solar energy, characterizing it as a kind of public relations problem.

He encouraged the geothermal energy sector to become even more assertive in demonstrating to the large governmental programmes that geothermal energy can offer not only opportunities for technology transfer toward the producers of geothermal energy but also in the other direction: that is, geothermal energy can offer a unique, differentiating testbed for key aspects of 5G research. For instance, in current research efforts to create an overarching “Internet of Energy” integrating many different energy sources, geothermal energy has the unique characteristics of being a renewable, yet constant and stable source of energy, which make it a candidate for replacing the fossil fuels that previously fulfilled this role as a baseload energy provider in an integrated scenario with variable sources of renewable energy such as wind.

As another example, he cited the remoteness of many geothermal energy facilities (e.g. at 4500 meters of altitude in the Chilean Andes) as an ideal testbed for demonstrating the effectiveness of 5G wireless in supporting vast networks of smart meters to provide efficient maintenance at relatively low cost even in the most demanding circumstances.

The conference concluded with general appreciation from the organizers and from the participants.

An ENEL report, the technological innovation of  EGP at the International Robotics Festival, is also available online here.